CALL SHO-ME PEST CONTROL, THE BEST PEST CONTROL PROFESSIONALS FOR TERMITES AND OTHER WOOD DESTROYING INSECTS IN MID-MISSOURI. LET US HELP YOU WITH YOUR NEXT PEST EXTERMINATION.

There is plenty of information out there about how to prevent termites, but keep in mind that if you are dealing with any wood-destroying insects (especially termites), you should consult Sho-Me Pest Control Mid-Missouri’s best Pest Control Professional to protect your investment.  Call to have a WDI Inspection done on your home today!  Residential and Commercial termite control.  Don’t put off having a termite treatment done on your home or business.

Eastern carpenter bees are often seen foraging nectar from flowers. They are primarily a forest species, as they bore nest holes into wood. It is the only large carpenter bee in Missouri.  Eastern carpenter bees somewhat resemble bumblebees but have noticeably black, shiny abdomen. Bumblebees, although about the same size and shape, have a noticeably fuzzy abdomen, usually with a prominent yellow band across it. You can also distinguish the two by their behaviors: Carpenter bees are rather solitary and excavate their nests in wood. A small pile of sawdust beneath a hole about ⅜ inch in diameter is a clue to their presence.  Carpenter bees prefer weathered, unpainted wood, so treating or painting your wooden structures will provide some protection from them.  They bore holes into decks or other wooden structures.

Powderpost beetles are small, reddish-brown insects that attack wood and by their feeding activity reduce the wood to powdery-fine sawdust. Lumber, furniture, and other items made of wood can be weakened or destroyed by repeated attacks over an extended period when conditions are suitable.  These beetles inflict damage by creating narrow, meandering tunnels as they feed on the wood material of your house. Signs of an infestation include small round exit holes (1/32” – 1/16” in diameter). 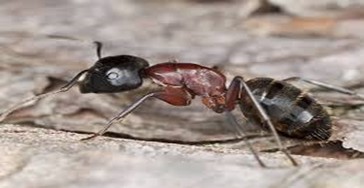 Carpenter Ants are relatively large. Known mostly by their size and color, carpenter ants are commonly black, however their color can range from black to red or even solid red.

1. Carpenter Ants Chew Through Wood but Do Not Eat It.
Carpenter ants are sometimes compared to termites because they both chew through wood. The difference is that termites eat the wood and carpenter ants do not. Instead, they chew it up and spit it out. Even though these large ants don’t consume wood, they pose a threat to structural beams and other wooden structures. Fortunately, carpenter ants typically stick to damp, decaying wood like old tree trunks.

2. Carpenter Ants Are Difficult to Get Rid Of.
It’s not easy to get rid of carpenter ants completely. One queen can live up to 25 years! During this time, the queen can establish many satellite colonies and produce thousands of babies. Some of the babies will grow from workers to queens of their own colonies. To prevent carpenter ants from taking over, pest control measures are crucial.

3. Carpenter Ants Will Bite in Defense.
If their nests are disturbed, carpenter ants won’t hesitate to defend themselves. Because of their large size, the bites can be quite painful. Not only do these pests bite, but also, they may spray a defensive chemical into the wound. This chemical, called formic acid, is used to enhance the pain when fighting against other insects.

Do you have carpenter ants in your home? Protect your home and call Sho-Me Pest Control. Large-scale ant infestations typically require help from an experienced exterminator.

Subterranean termites are social insects that live in colonies within the ground and have specialized castes to perform specific colony functions. The termite colony has three primary castes: workers, soldiers, and the reproductive (kings, queens, and secondaries). The creamy-white workers are seldom seen unless a termite tube or infested wood is broken open. It is the workers that feed on the wood and cause damage. Individual workers are believed to survive for up to five years. Soldiers have elongated yellowish heads with large jaws and are about the same size as the adult worker-a quarter-inch. There are fewer soldiers than their associated workers and must rely on the workers to feed them. Whenever the colony is invaded or a hole is made in a tube or piece of infested wood, the soldiers will use their jaws to defend the breach. The secondaries are supplementary reproductive females that occur in mature colonies under favorable conditions. The kings and queens are dark-brown or black and about 3/8 to 1/2 inch long. They have two pairs of translucent wings of equal length, which break off shortly after swarming. Very often the shed wings are the only evidence that termites are in a building. In Missouri, the winged eastern subterranean termite swarms during the day from March to May. Generally, termites swarm on a warm day after a rainfall. Termites are active across the state of Missouri, which includes local areas such as Rolla, Lebanon, St. Robert, and Waynesville.

1. Termites cause an estimated $5 billion in damage each year, according to the National Pest Management Association.

2. Termite damage is rarely covered by homeowners’ insurance since most insurance companies view termite damage as preventable. It’s something you can and should prevent.

3. Unless you live in Alaska, your house is not safe from termite damage.

4. A termite colony can contain 1 million or more termites, and it’s not uncommon for a home to have multiple colonies feeding on it at the same time.

5. Termites can travel more than 100 yards in search of food.

6. Termites can be on your property without any visible signs of damage.

7. Termites only need a 1/16-inch gap (the width of a credit card) to gain access to your home.

8. Termites are foraging and feeding machines, working around the clock to find food.

9. Termite foraging activity, which includes searching for and retrieving food, is influenced by environmental factors like climate, soil temperature and moisture. In the United States, foraging termites tend to be most active in the spring, early summer, and autumn. But, that doesn’t mean they just go away in the winter months. In colder areas of the U.S., termites may still be found feeding on centrally heated structures that are protected from the cold.

10. Termites have one of the longest life spans of any insect – some termite queens can live up to several decades.